Is it the last day of April already? You’ve got to be kidding me. Hello there everyone and happy Friday! I hope everyone is doing well and enjoyed their month. Let’s keep it real, I totally forgot to post a monthly lookahead. I wasn’t in the best headspace for some part of the month and then I experienced the dreaded writer’s block. But, I will be giving you guys the full April recap that absolutely no one asked for! So get ready for the read because it may be a long one (or not).

Whipped Out the Hand Mixer

Last year I discovered how much I loved baking from scratch. I surprised myself and my family with how good I actually was. The last time I baked something from scratch (before this) was the holiday season. That’s quite a while to me. I didn’t know what I wanted to come back with so I asked my boyfriend if there were any desserts he desired. He suggested blueberry muffins because it’s something both he and Isaiah would enjoy. I thought that was a great idea since we always have a million blueberries in the fridge. So, I made them, and turned out to be a hit. The boys loved them and I was able to drop some off at my moms’ for some of my other family members to try. I want to bake them again because I’m a perfectionist and there are lots of things that I need to tweak but it was a great first run.

Another thing that I was more than happy to bake was Funfetti brownies! On my Pinterest you’ll find a ton of pins geared toward my sweet tooth. One group is strictly for Funfetti desserts. I saw these jaw-clenching sweet desserts but could never really make them. This time I had no excuse and after a glass of wine, it sounded even better. The recipe I used was turning out to be a flop so I kinda had to improvise and hope for the best. I’m glad I didn’t give up though because they ended up coming out amazing. 10 out of 10 gotta bake them again. I just wish I wrote down the ingredients I used. I guess I’ll have to improvise again!

I didn’t get the best picture because I was too eager to eat but I did get something. This brownie was like a delicious heavenly party in my mouth. It’s stuffed with rainbow sprinkles and white chocolate chips. If you didn’t know, I’m not the biggest fan of chocolate unless it’s white chocolate so this was the perfect brownie for me. I enjoyed it with a large scoop of cookie dough ice cream topped with more rainbow sprinkles. I made it at the perfect time because I was also able to share some with my grandma for her 83rd birthday! She loved it too! I have a ton more things on my list to bake next.

I’m definitely caught up on all of my shows. I binged new shows and rewatched old ones. Just what the doctor ordered. The first show I got into was Marriage or Mortgage. That show is so freakin good! It literally just came out in March I believe but I was so upset that there wasn’t a second season already. It was cool to see the wedding planning process as well as what it would be like to buy a house.

When that season was over I was still in the wedding mood so I started to watch Married At First Sight but this time my boyfriend joined along with me. This has become our new show and it’s been great for us. Not only is it a show about relationships but it’s also another way for us to bond. Before Isaiah, we used to binge-watch shows together all the time!

Another new show I enjoyed watched was The Baker and the Beauty. I’m the late one and the show has already aired on tv a year or so ago. The preview for the show was enough to reel me in. I finished the series in like 4 days. I recommend it if you’re into romantic comedies. I also love how it’s based in Miami so it has that Latin vibe to it. Reminds me of Jane The Virgin a little bit. When this was over I wanted to watch something else with the same vibe but since I rewatched Jane a million times, I decided to rewatch Gentefied. I love that show and cannot wait for season 2 to come out soon.

Speaking of rewatches, I rewatched all of Good Girls so I can be up to date with the new season on air. This new season is so much better than boring ass season 3 #sorrynotsorry. Some other shows I rewatched include The Great British Baking Show and last but not least Big Time Rush! That was one of my favorite shows in middle school. I even remember going to see them at a local mall for a ‘meet and greet’. It feels so nostalgic watching the show again as an adult.

A different kind of video I enjoyed watching AND filming was this mukbang I recorded with my mama! Check it out!

April was filled with beautiful spring weather. We did a lot of outdoor things like go on park dates, had a mini bbq in the back of our apartment, and even went out for an outdoor lunch. I’m surprised I’m able to be outdoors so much with these allergies. This season seems to be the worst one in a very long while. I’ll probably have to get some over-the-counter medication or something.

With all that being said, this month was good to me overall. There were little bumps but nothing I couldn’t handle. I’m continuously getting my groove back and looking to better myself. As long as we are all safe, healthy, and together I don’t have much to be mad at. We ended the month with Isaiah getting another fresh haircut and with me spilling Merlot on the cream walls. It was a horror scene. I even got it on my white pillows. Guess who wasn’t mad? Me! The wine helped with that though. Alright, everyone, that’s gonna be all for this recap. See ya next year, April. Talk to you guys soon!

Did y’all enjoy April? What are some of the highlights of the month? Are you looking forward to anything next month? Let me know in the comments below!

a little about the creator 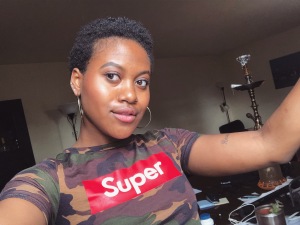 My name is Tiani and welcome to my blog. I started off talking mostly about mental health and slowly moved towards lifestyle as well. Now I can add mommy life because I was blessed on October 2nd with my first born. I hope you guys enjoy reading and thank you for coming on this journey with me.

Have You Seen These?